Updated: March 6, 2020 with correct worker count as 16, and additional resources in db section.

I recently did some Pulp3 scale testing, and I wanted to share the results along with how others could reproduce them. I did this for pulp_ansible which manages Ansible Role and Collection content and is compatible with the ansible-galaxy command line.

I started 16 workers, one for each CPU. I installed Pulp to this Amazon machine using the Pulp 3 Ansible Installer. I used this config for 16 workers and pulp_ansible and the installer’s generic playbook.

Before running the installer, I:

I then installed Pulp using the following command:

After creating all of this content (see how below), I ran a test workload on it which simulates adding a randomly selected CollectionVersion to a randomly selected 1000, 2000, 5000, 10000 repositories. The promotion workflow, is a two task workflow:

Each batch’s set of Repositories are mutually exclusive with all other batches so these tasks are fully parallelizable with each other. This means the more workers a Pulp system has the workload should run faster and faster, assuming adequate hardware resources.

NOTE: Anytime we talk about Repository, we technically are talking about an AnsibleRepository since Pulp repositories are typed.

The measurement is for the completion of all tasks. I monitored this using the following command with Django’s shell_plus command until it shows 0 tasks:

Here are the results:

The system’s load falls mostly onto the DB and is CPU bound. All 16 workers of Pulp were engaged (as expected) and the postgresql processes auto-scales in terms of its processes, but it only has so many CPU cores to serve 16 independent connections (one from each Pulp worker).

Here’s a screenshot showing the postgresql processes heavily loading the CPU above 80% and 90% along with the rq Pulp worker processes submitting the SQL to PostgreSQL. I interpret the rate-limiting component to be the CPUs the database has access to. 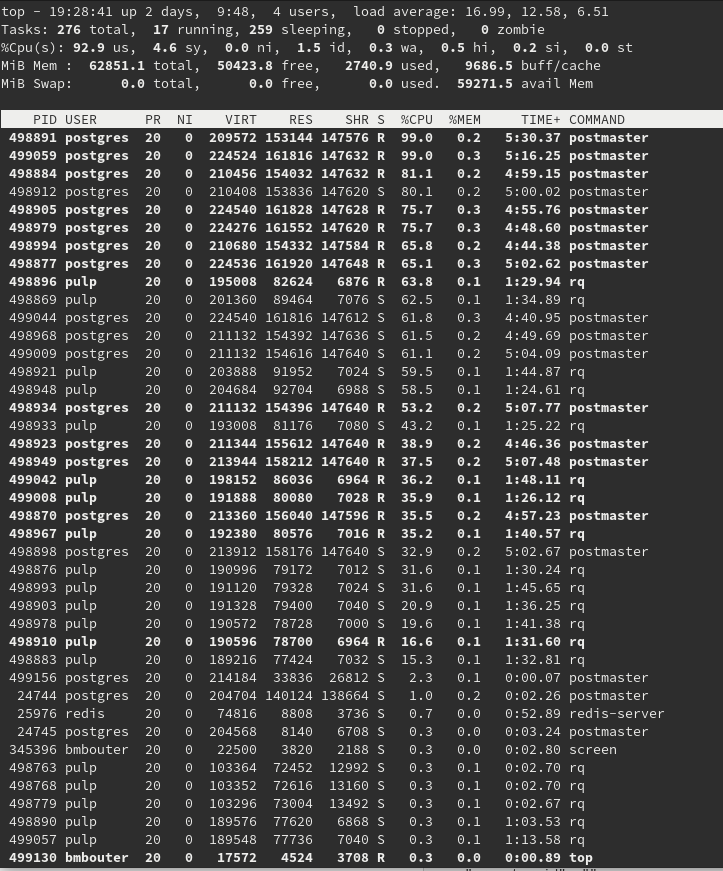 I enabled auto_explain for postgresql with these settings in my postgresql.conf:

During promotion workflow testing, it shows slow queries like this one: https://explain.depesz.com/s/Wi2Q. Suggestions on how to improve this are welcome, but it’s overall a large database to query against. One unexpected part of the query plan is step #15 which perform a sequential scan against a table with an Index. After some discussion in #postgresql, other users there pointed out that the postgresql query plan is optimized and in some cases a Seq Scan is faster depending on the number of expected rows to be matched, e.g. 4950 in this case.

I confirmed the indexes were present, you can see the databases indexes present. Additionally a single query by pk on core_content does show an INDEX SCAN to be used in the explain output.

All tasks have to flow through the resource manager to provide the locking guarantees Pulp workloads require. This has a non-trivial overhead, and you can see that as the batch sizes get bigger throughput increases a little bit.

We should look at benchmarking the maximum task throughput of the resource manager in a separate blog post.

This system used 16 Pulp workers and so the work was divided over 16 parallel processes. If the DB has enough resources to keep up and Pulp had more cores it could start more workers and they could also run in parallel.

This means that those with more resources can scale up as much as their PostgreSQL cluster will. Also if you want to start a few workers Pulp will just work on the same workload over more time.

With each run more RepositoryVersions are created. Before the table was generated it was already 173,311. With each test run that number increased and for the 10,000 repo promotion test it was increasing 5% each time (roughly). This causes a non-negligible slowdown which you can see in the 10,000 repository row, with each test taking an additional 8 seconds.

To run this scale test I needed to develop some tools. I added these to pulp_ansible and documented them here.

Each of these commands dispatches commands into the Pulp tasking system. This is a convenient way to both have a direct connection to Pulp inside the task, but also to not have to write a custom multiprocessing deployment for such large workloads.

There are two halves to this implementation. There are dispatching commands which all use argparse so you can inspect them for their options with -h, e.g. python generate_collections.py -h. Those commands dispatch these tasks to Pulp workers which perform the workload. Below is a look at the commands available.

This command created 10k collections in 29 min and 25 seconds. It dispatched 100 tasks to be handled by the 16 workers. It uses the shared filesystem as storage.

This command imported 10k collections in 32 min 52 sec. It dispatched 10000 tasks to be handled by the 16 workers. It reads from the shared filesystem as storage.

Create Repositories with RepsoitoryVersions and Collections

This command was started and stopped a lot, so I can’t report on its runtime.